Does Anyone have the same behaviour? You open Task manager, and see the Antimalware Service Executable on 30-40% CPU load and rapidly dropping.

Does Bitdefender have an included monitor for Task Manager or why is this happening? Bitdefender is generally considered as a pretty good program, but my experience is that it is somewhat of a resource hog, even on a plugged in desktop and for tha6t reason I haven't been fond of it. It looks looke the same thing I've seen before.
P

Are you sure its not Windows Defender?

Try opening Windows Defender from the Control Panel. It should be disabled if you have BitDefender active.

ptrkhh said:
Are you sure its not Windows Defender?

Try opening Windows Defender from the Control Panel. It should be disabled if you have BitDefender active.
Click to expand...

I don't see an Antimalware Service running when I open up my task manager. I use Defender, which comes pre-installed and it is a program by Microsoft so I don't see any need to install another anti-virus program on my Surface. You must have installed a couple applications that I haven't seen mentioned or discussed here on this forum - Antimalware Service & Bit Defender.
OP

Oh... Sorry my fault. It was Windows Defender and not Bitdefender... i mixed that one up. 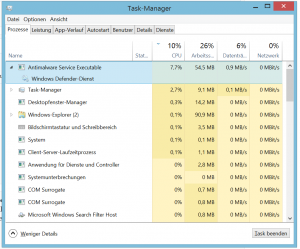 I got my SP3 on thursday & noticed this straight away, found it rather annoying so followed the guide in this youtube video:

Welcome to the forum @Darcy
OP

any comments on the steps in this video?
Problems that might arrive?
OP

Staff member
Video? I see no video... that Google Privacy Filter is maaaveelous... will take a peak from my insecure computer

ok, The Run with highest privileges check box. This allows Windows Defender to run with elevated rights and ensures all malware really is removed. According to one site...

It might also be possible that without this setting certain files and directories cannot be scanned.

Staff member
This is what I would try if I was going to change something...
Change the Conditions tab from With this hopefully it would only run while being idle and on power not on battery. Likely at night while you're sleeping.
You must log in or register to reply here.