I checked it on my Surface Book 1706 and i can't run Windows 11! THough i think the Surface Book has a much better system than required do we have to enable TMP? Where can this be done?
A

renes86 said:
I checked it on my Surface Book 1706 and i can't run Windows 11! THough i think the Surface Book has a much better system than required do we have to enable TMP? Where can this be done?
Click to expand...

You can enable TPM in what we used to call the BIOS menu. Get into that on startup and you should be able to enable it there.
R

than it might work, i read somewhere that need to be enabled
R

Staff member
There's a Github app for this whynotwin11

Everything checks out except the CPU which was expected since they want an 8th gen CPU. I think it should still work though. Note the downloadable build is 64bit so I couldn't run it on my ProX... Tried to build my own but ran into build probelms ... Something not setup right on my build machine...


Same on the Surface 3 Atom 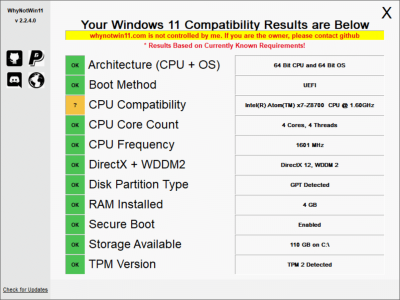 Markc79 said:
I'm quite excited to see the advent of a new version of Windows, although marginally cautious, as traditionally we don't get three top notch versions in a row! Does anyone know whether there will be a version of Windows 11 native to ARM, and whether this might include solutions to some of the frustrating compatibility issues that we on the bleeding edge have had to deal with (SPX - I'm looking at you!)?
Click to expand...

I think the native Windows 11 will run on ARM. Watch the release video carefully - the Surface used for the tablet portion of the demo was a Pro X.

SB1 has 6th Gen Intel Core i5 or i7 CPU. It would definitely run the Insider build available now. We won't know what the Release Version will do until later. I'd guess MS will cave and at least allow people to run it with perhaps a big ominous warning screen upon install you'll have to OK (and possibly sign over your firstborn /S).

I am using it with the Surface Go 2 Core M3. The PC Health Check says it isn't compatible because of the CPU, but I did the Windows Insider Developer Update. It still claims I cannot run Windows 11 on Windows 11.

In my experience, it is buggy, but it is far more functional than Windows 10, which has been a headache for me from day one. However, Windows 11 chews the hell out of the battery, where I can drop from 100% to 40% in under an hour.

The most noticeable change is the touch navigation, which has been a superior experience over Windows 10. In fact, most of the problems at the core of 10 don't appear to present with 11.

There is a "feature" that has been complained about a lot, & that is the top most used apps, which is impossible to change in any way whatsoever. Not even Regedit or the Terminal (the new PowerShell made to look like command prompt) can change that history. Microsoft claims that it originally had an option to clear that history, but the development team thought it would be a better option to take away all user control of that option to lock it in to "give a better user experience" through force.

The file explorer crashes regularly, but it automatically reboots without effecting most third party software. It appears that the explorer is now UWP (Windows Store App) based coding now, which is unstable as nearly all the Windows 10 Store apps.

Some logs & history can only be erased through the Registry Editor, but that is a trivial issue for me as I am well versed in Regedit, thanks to Windows 10's long standing bugs & design flaws. So I have little issue navigating the keys since I have lost count of the amount of times I have had to use it to fix yet another Windows 10 problem, which usually occurs after a major update that doesn't know how to clean up the old keys correctly.

Windows Security is unstable too, but that is also trivial as it keeps disabling after every reboot & you can just turn the security features on manually through the Security Settings after each boot.

All 3rd party software works without any issues at all, unlike Windows 10, which occasionally has really stupid bugs, which generally happens after a Windows 10 build update or with a fresh install of some apps. However, the Windows Security software will erase any & all torrent related software, which it claims is malware & you have to make an exception before taking it out of quarantine, or it just puts it straight back in faster than you can blink.

Games run fantastically with a clear image, no screen tear (10 problem) & the framerate dips are nowhere near as often & severe as Windows 10.

Windows 11's settings is also unstable with options & features regularly vanishing & leaving some windows blank with only the 'Get Help' or 'Give Feedback' links showing.

It is much more stable on my gaming PC, but the UWP centric explorer still regularly crashes & the scaling is still as god-awful as 10, 8 & 7's scaling issues, which can trigger all the option & widget windows to be blank if you go over 150% on a 4K TV.

Windows Hello works every time when I log in on my tablet, which almost never worked with the Kinect which is still a problem on 11, but now sometimes works & only would work half of the time on the Surface Go, which now works all the time. every time. There was an exception with a build update that deleted all the Windows Hello features & any attempt to click the options would crash the computer, but Microsoft installed Hello through the update in less than 12 hours & it worked again without having to set anything up.

Windows 11 still has the bug where Hello would break all networking if you didn't set up the network computers before setting up Hello, which would result in the 'invalid credentials' bug. You can work around that bug by deleting the Hello configuration, removing the authenticator & disabling the 2-step authentication, setting up the network computers to communicate with each other & setting up the remote desktop (if desired) before putting back all the security & Hello settings. I also switched off the Hello requirement for networking on both devices, but I have no idea if that made any difference.

So far, I like being able to run something without having to dick around for 20 minutes trying to fix yet another problem, but I also made the same claim with Windows 10 Insider Build when I ejected from Windows 8 at the first chance I got. Then the build updates happened after the launch, which just broke something new with each quarter.

I hope they don't screw anything up by adding in unwanted "features" that tend to destabilize the OS because of some conflict or another between now & the launch date.

In the end, my most major gripes are the 'Top apps' lockdown & the power consumption. Most other issues are tolerable. Mostly because I know I am working with an alpha build & hope the devs will get around to fixing those problems & those issues don't have any significant impact on my overall experience outside of being mildly annoyed at worst. Who's still using Internet Explorer? And why won't they upgrade?

After the New Start Menu, This Might Be Windows 9's Second Killer Feature

S
New to Forum! (and quite a journey so far)