I've Googled my issue to my wit's end, but haven't positively determined what the problem is or found an overwhelming number of people who report the same problem as I'm having.

I recently received a brand new Surface Pro 6 at work - the new i7 processor, 8gb RAM, 256gb SSD, Window 10 Pro. Other than taking it out of the box, the only thing that the IT department at my company did was add an active directory/domain so that I can login using my work credentials, as well as access our servers via VPN.

While customizing my new digs to my liking, I noticed that it was taking an inordinate amount of time to install new application and get my Google Backup and Sync up and running. I started to suspect that it was a bandwidth issue, so I ran a few different speed tests (on a few different wi-fi networks) and sure enough - about half the time my download speed reports < 1.0 Mbps. I will also note that I tried these exact same speed tests with my existing Dell laptop (Latitude E7440 running Windows 7 Pro) and download speeds averaged ~ 140 Mbps. Strangely enough, the Surface Pro 6 did fine on the upload portion of the test - 30-40 Mbps, which is consistent with what I see on other devices.

I've tried at least five different wi-fi networks and across the board, the MSP6 download speeds are at least a factor of 10x slower than all of my other devices. To provide further detail, here are the things I have tried (that have not helped at all):
- installing the most recently .msi driver pack issued by Microsoft for my device, which included drivers for the Marvell AVASTAR Wireless-AC Network Controller (revision 15.68.9125.57 released by Marvell Semiconductor)
- rolling back driver to the previous version for the Marvell network adapter
- Reverting back to the stock driver that was installed on the computer from the factory
- uninstalling the device without deleting the device drivers, restarting, and re-installing the device
- uninstalling the device with deleting the device drivers, restarting, and re-installing the device
- trying the ubiquitously reported Surface Pro 4 download speed fix (editing a registry file from a 1 --> 0 to disable a specific administrative template function)
- disabling IPV6
- disabling connected standby with & without then modifying the network card power management settings to high performance and allowing the computer to put the card to sleep

I'm no computer guru, but I'd put myself square in the intermediate category of experience and general computer knowledge. I have tried literally everything I can think of, but mostly to no avail. I did attempt to investigate whether my download issues were related to a specific Wi-Fi 802.11 protocol, or a specific frequency band, which has ostensibly been the most fruitful in troubleshooting. The download speeds appear to be worse using an 802.11n signal than using 802.11g or 802.11ac. At my home, I have a 300 Mbps cable connection through Spectrum with a Linksys EA7300 router. I have tested at least 7 different devices - my personal Dell XPS 9370, my old Dell XPS L702X, the E7440, my Samsung S8, my Samsung Galaxy S2, my MSP6, and my wife's iPhone 8. The MSP is by far the slowest - magnitudes below every other device.

Any recommendations would be more than welcomed. At this point, I'm so exasperated that I'm considering having it sent back and getting a different device. For what it's worth, another worker in our office got the exact same device and his unit has the same download speed problem. Why would it be so much slower on DL than UL? I figure that has to be the most defining symptom of my underlying problem.

Let’s try to get you fixed up.

Thanks for trouble shooting and documenting the problem very well. Sorry you are having this trouble.

A couple of questions, to see if the problem has to do with your VPN routing. No surprise that uploading is fast, since that would be routed differently. Your company may be using a server to filter content and add security, which may be slow.

1. How does WiFi from within your company work? Is it slow, also?

2. How is the speed using a direct Ethernet cable to your router?
OP
S

1. Wi-Fi in our office consists of a Cisco router that provides an intranet connection to all of our offices' servers (my local one, as well as 10 other server drives in our other offices across the US), company email, etc., as well as an access point to the internet like I have at home. Using this connection, depending on whether or not I was connected to the 5 GHz 802.11ac or the 2.4 GHz 802.11n (the router provides both), the speed test resulted in a range of download speeds between 20 - 35 Mbps - considerably faster than at home, but still nowhere near what our connection is capable of. I am also able to connect my personal laptop to that router, though without access to the company intranet. My XPS had no problem connecting to the 5 GHz ac wi-fi and my downloads were > 125 Mbps each time I completed the test.

2. I have not tried an ethernet cable connected directly to my router at home. However, I have a dock at work that is provided an ethernet connection that accesses the same network as the internal wi-fi, and I tested the speed this afternoon. It was much closer to what I would expect from this device on this internet connection, 80 - 90 Mbps.

Thanks for your help and let me know if there's any other information I can provide that may help you guide me.

Staff member
Okay, thanks for that.

Your VPN may be throttling the speed (deliberately slowing it) to balance demands on the security software the VPN uses. Your IT department will probably be aware of this. Also, ask if a single "socket" is used for connections via WiFi or outside of the company offices. This slowdown can make viewing videos, or downloading large files painfully slow, since throttling also often distributes access to all connected users, so that nobody "hogs" the bandwidth, even for a short-term high demand.

I am guessing you have smartphones which also access the VPN via WiFi within the company offices. If so, run a speed test on one of those smartphones, and compare. Also compare the smartphone VPN speed to the smartphone without the VPN connection, if you can.

Staff member
Here's another way to possibly isolate the problem: Do a LAN speed test. Unlike an Internet test, you can check the speed of your local area network only.

LAN Speed Test is available in a free version which should work from Totusoft. Other products that can do this are LANBench and Freebie LAN Speed Test. As always, beware of nefarious installations.
OP
S

Attached is a screenshot of the Totusoft program that I ran with the Surface Pro 6 using the wi-fi connection of my home network (5GHz, 802.11ac). I don't know if this is as helpful as the one from my work network will be, but maybe it'll at least give you an idea of how my hardware is operating. Based on the results, it seems like the read and write speeds have plenty of capacity for much faster transfer speeds from an ISP, unless I'm reading those numbers in correctly. 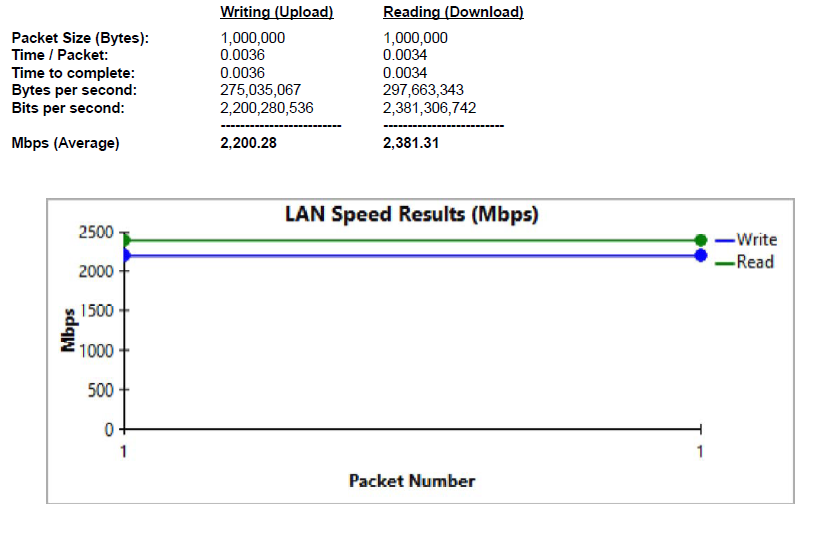 Staff member
Okay, I think your computer and WiFi are fine.
VPN throttling or capacity is the likely culprit.
OP
S

My biggest slowdown is experienced from my home though. My home wi-fi connection wouldn't be routed through the VPN unless I have it enabled, correct?

I guess I should have been clearer earlier - in my first post, the Dell E7440 I mentioned was my previous work laptop. It has the exact same networking, VPN, and communications configuration as the new Surface Pro. When I connect them to the same home Wi-Fi network, using the same 802.11 band, within 4 inches of one another, the speed test download speeds are a factor of 5 or more different. The Dell consistently tests over 100 Mbps. The Surface Pro has yet to top 40, and the one that came close to that was a huge outlier compared to the average result.

I know this may be an obvious question, but the Fall update (October 2018) is widely known to have improved connection speed.

Sorry, I had missed your post about the docking station. Might be you and your colleague need 1809?
OP
S

It's funny you mention that, because I've been refreshing Windows update as often as I'm able to get my machine caught up. I don't like how it trickles in the required updates instead of telling me all of the updates I need and downloading them at once. I find that I have to check for updates, download/install/restart, and then manually go to update section and click 'check for updates' over and over again. Anyway, about 10PM last night Build 1809 update was reported to me in Windows Update and I downloaded and installed. I haven't had time to check out my network connectivity today, but I'll do that between today and tomorrow and report back with my results, both as an absolute an as a relative to my pre-1809 connectivity. Thanks again for your help, I know how frustrating it can be to help someone over the internet when you have no idea what they know and if they might have inadvertently screwed something up while tweaking advanced, sensitive settings.

Staff member
Let us know results after you test ...

Also, another thing to consider is that when you check speed, be sure to pause or exit OneDrive, because it will be taking much bandwidth to update (sync) your files. In fact, many Windows 10 updates will not be available to you until OneDrive is caught up, which may be why it took so long for 1809 to be available to you. To be clear, this is not a problem with OneDrive, but a necessary feature.
OP
S

Using the 'Add or remove programs' in Windows 10 settings, I actually uninstalled OneDrive completely. To confirm that it wasn't periodically running anyway in the background, I've used the task manager to verify that no OneDrive-related processes or tasks are running (processes, details, and services tabs). For some reason I was thinking that in previous Windows 10 builds, OneDrive was not removable (at least not easily). However, now it's as simple as uninstalling any other third party program.
You must log in or register to reply here.