I've gotten hard cases for all my electronic gadgets ever since I got a clear case for my first iPod Video (still working after 7 years of heavy usage, probably because of my case!) I got a Pelican case for my last tablet and loved it, it was reassuring to know that my tablet was crush proof and water resistant for a few feet deep during transport. Naturally I ordered the next size up for the Pelican case after I decided to keep my Surface Pro:

The case was the same quality build and design as my previous one, but it ended up being over 2 inches thick and weighed more than 2 pounds. That doubled the carrying weight of my Surface, plus it barely had extra room for my Stylus. I wanted the security of a hard case but it added too much bulk for casual transport or taking in and out of a bag or backpack. I found a Nixon sleeve for a good price so ordered that. Will post a review of that once it comes in. It's surprising that the Nixon was the next durable case I could find after the Pelican (for transport, I don't want an everyday case since I already have a type cover.)

It seems that if you don't want a flimsy neoprene cover or a slip on folder/leather case you're shit out of luck if you own a Surface.
B

After lots of online and in-store searching, I finally narrowed my search for a carrying bag down to these three:

My preference was the CaseCrown followed by the Targus, but I ended up getting the CaseCrown bag. It comes in three colours: black, brown, and magenta. Also, it comes in either a horizontal and vertical orientation. I went for the horizontal one in brown and got it in the mail a couple of days ago. My first reaction is that it's outstanding. Looks great and has really good functionality.

The case is nylon and has a bit of a shimmer to it and the interior is a bright orange. There are many pockets on it for putting your stuff including one on the outside of the cover and a quick access pocket on the back. There is a small pocket on each side, though they're pretty tight and you wouldn't get much more than a few pencils in them (definitely can't put in a water bottle.) Open it up and there's a pocket on the inside of the cover that looks like it's made for a passport and on the outside face there is a slip pocket and a zip-up organizer pocket with space for three pens and some cards and a clip for keys (and they give you a nice keychain). Inside, there's two main compartment2; one is padded for the Surface and the other is non-padded and has a divider, good for notepad, small book, or your surface accessories like mouse, charger, and displayport adapters. The Surface compartment is perfectly sized; the surface slips in easily but it isn't loose (at least side to side, there's a bit of room at the top though it can be cinched down with the elastic strap with velcro). I was able to slip the surface in with a tiny usb receiver sticking out and the type cover 2 on and it's a good fit. There is a shoulder strap, but no handle for carrying it with your hand.

All in all, I'm very happy with the purchase and think the price was right. I do a bit of traveling for work so it was important that the case could carry more than just carry the Surface, so having all the extra pockets is helpful. It's nice because it's not a bulky case at all and is clearly designed for the Surface based on the perfect fit. 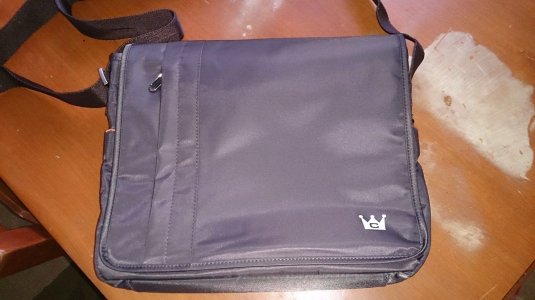 Front with Surface on top for size comparison: 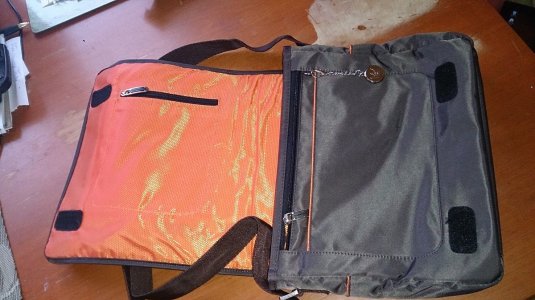 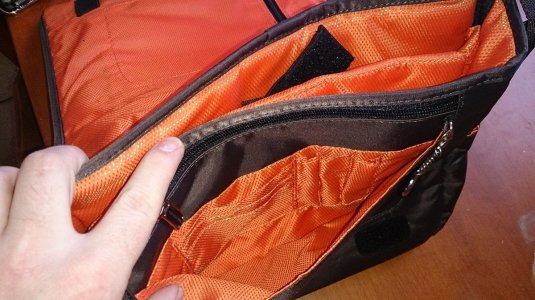 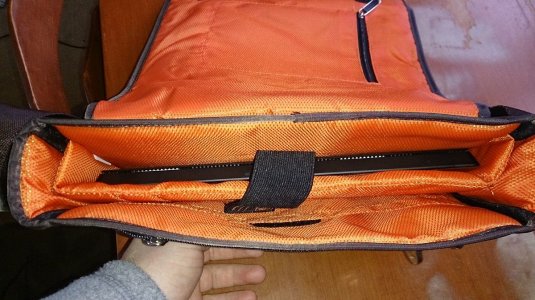 BullfrogJG said:
...I ended up getting the CaseCrown bag... ...the case is nylon and has a bit of a shimmer... ...there's a bit of room at the top though it can be cinched down with the elastic strap with velcro... ...clearly designed for the Surface based on the perfect fit... 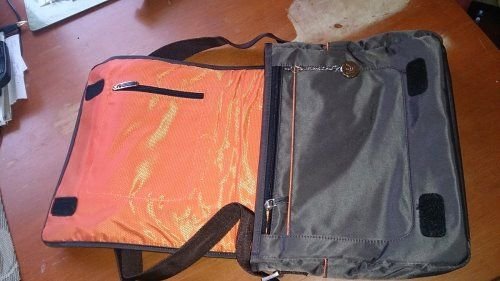 To much shimmer, nylon and velcro for me personally, but whatever works for you is the best choice ;-) I like magnetized closures, snaps and zippers myself. I also have a preference for more natural looking materials, at least on the exterior -- coated canvas; leather; etc. If the exterior is a man-made, I at least like it to approximate a fabric look.

Something to keep in mind when searching for a case: Anything made for the 11" MacBook Air is a perfect fit for the Surface Pro/Pro2
Last edited: Apr 5, 2014
B

So many bags/cases, so hard to evaluate and choose (well, that's the part I hate)! Need to find some good ones for my family's SP2's.

I started off just looking for a small sleeve without extra bulk/pockets, something they can drop into a bigger bag for travel (but should still fit the Type Cover as well as a folio, Incipio Feather, or FreedomCase).

But then I started wanting such a case to still have enough space to comfortably slip the charger in (impossible with many sleeves), as well as having a handle and/or shoulder strap for situations where family members will carry it stand-alone.

Then I started thinking, hmm what about extra pockets for other stuff as well...

Anyways, here's what I'd bought back in Jan-Feb, thanks to forum members. Still need to evaluate more, but for ones we like I'll buy several qty for each family member. Ones voted down will just get dumped in the closet (not worth returning, especially since many are under 20 bucks).

The trick is to find a case with device compartment long enough without being too tall at the same time. The SP2 is around 10.8" x 6.8", and a lot of tablet cases don't have ample clearance for the 10.8" length (much less the side-mounted pen or any USB dongle), but have more height than necessary.

- Amazon.com: Kensington Soft Carrying Case for for iPad 4/3/2/1, Nexus 10, and Surface Pro: Computers & Accessories
Good fit for the SP2. A slim neoprene sleeve with fleece lining, but also has handles and a front accessories pocket that you can stuff the charger in a pinch (though it'll stretch into a bulge which I'm nervous about). Some reviewers also claim the handles can break.


- Amazon.com: AmazonBasics iPad Air and Netbook Bag with Handle Fits 7 to 10-Inch Tablets (Black): Computers & Accessories
Similar neoprene sleeve with handles and front pocket, at a throw-away price. But it's too tall for the SP2 by, like a couple inches! Quality built but not rigid enough to stand up on its own when leaned against a wall (unlike the Kensington).


- Amazon.com: Case Logic VNA210 10.2-Inch Netbook/iPad Attache (Black): Computers & Accessories
A thicker case with two front pockets that can comfortably fit the charger, etc. Handles plus removable shoulder strap. Tablet compartment is 10.5" x 7.7" which is about an inch taller than necessary (it's also designed for 1.5" but the SP2 is only 0.5" thick). FWIW the extra thickness did let me squeeze in multiple SP2's at the same time (not that you'd need to do this on a daily basis)

Here's the kicker though, Case Logic apparently revised the VNA-210 model, and the previous iteration had a compartment measuring 10.6 x 7.1 which would've been a much better fit for the SP2 (it's also slimmer, being designed for 1")! Anyone knows where we can still buy the previous model??


- Incase Chromebook Briefcase CL60460 - Best Buy (benjitek)
Just as thick and tall as the Case Logic VNA-210 (current model), but even longer by a couple inches. Similar assortment of pockets and space to fit the charger and a lot of other things. Too large for what I was originally looking for, though it's easier to carry documents.

Interestingly the device compartment is further partitioned with a fleece-lined pocket, but even the area outside that pocket is fully cushioned around the perimeter. I guess you could put a tablet in the pocket while a laptop occupies the rest of the space in the device compartment (if you're not using an all-in-one like the SP2)?

Funny enough I used this one day to carry 4 of my family's SP2's at the same time! Not a good idea though, as I felt that squeezing 2 SP2's into the fleece pocket stretched it too much


- SkyTab: Deluxe Black Hard Shell Case with Zipper for Microsoft Surface, Microsoft Surface
Interesting EVA hard shell case, but too tight-fitting. The SP2's corners where they flare out towards the front barely fit when pushed in, much less if using something like the Incipio Feather. They claim the mesh pocket can fit the charger but I don't see how you can even close the shell that way.

benjitek said:
To much shimmer, nylon and velcro for me personally, but whatever works for you is the best choice ;-) I like magnetized closures, snaps and zippers myself. I also have a preference for more natural looking materials, at least on the exterior -- coated canvas; leather; etc. If the exterior is a man-made, I at least like it to approximate a fabric look.

Something to keep in mind when searching for a case: Anything made for the 11" MacBook Air is a perfect fit for the Surface Pro/Pro2
Click to expand...

Well sure, I like those things too, but I couldn't imagine spending over $100 for a small bag for the Surface. $35 was pushing the limit for me. Yours looks great, though.

Yours looks great too, especially at that price. I was lucky, my SP2 was purchased by my work as it serves as my 'mobile office' -- the cases were on their dime so I was able to do more than if I were paying.
R

This is the bag that I use.
Everest Tablet Utility Bag - eBags.com

revmike said:
This is the bag that I use.
Everest Tablet Utility Bag - eBags.com
Click to expand...

That's a nice looking bag -- and very reasonably priced. Does the SP2 with a Type Cover fit in the padded tablet compartment or the center section?
B

revmike said:
This is the bag that I use.
Everest Tablet Utility Bag - eBags.com
Click to expand...

I agree thanks revmike. That sorta reminds me of the vertical CaseCrown or Duzign bags, but more reasonably priced.

How close is the compartment fit for the SP2?
R

Yes, it's wide enough to have one cover on and the other inside as well, I have both, I also have the incipio feather case on mine and there is plenty of room.
R

beq said:
I agree thanks revmike. That sorta reminds me of the vertical CaseCrown or Duzign bags, but more reasonably priced.

How close is the compartment fit for the SP2?
Click to expand...

As I indicated above, there is plenty of room inside the center compartment. It's a little close at the top, but it zips up even with the feather case on.
You must log in or register to reply here.

X
Must Have Surface Pro 4 Accessories?
2