Staff member
I have been using Windows for engineering and earth science work since 1982.
I have seen many crashes. Every version. Including Windows 10 Technical Preview Builds since October, 2014. Lucky for you. Mine looks like this on reliability monitor: 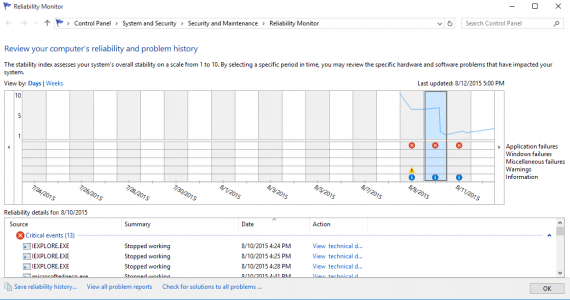 Apps love to crash on my SP3 LOL
OP

Staff member
Windows 10 has treated me much better than I've treated it.
Sometimes I hold the power button to shut down cold, try to force some old .DLLs to work, mess with the Registry.
But Windows 10 keeps me running just fine.
You must log in or register to reply here.