Staff member
Yes, your Skylake enabled SP4 will do that... and it will do it faster with less heat.

Skylake's Gen9 Graphics
The Gen9 graphics engine comes in multiple sizes for different power budgets. There are three main variants, GT2, GT3/GT3e and GT4e. In the slide below, the important aspect to note is that the media processing hardware (Media FF - Media Fixed Function) resides in the 'Unslice'. While the GT2 comes with the minimum possible Media FF logic, the GT3 and GT3e come with additional hardware capabilities. This strategy is similar to what was adopted in Broadwell. 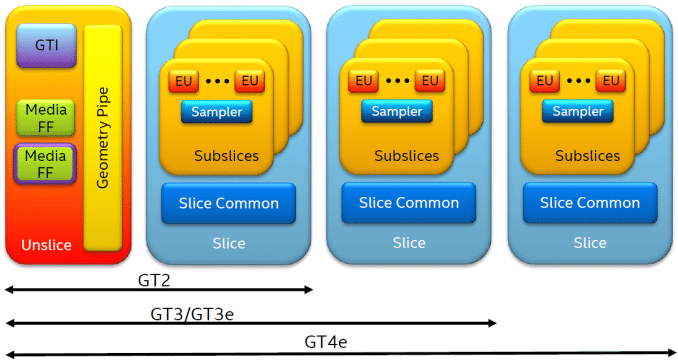 The Unslice can operate at a different voltage and frequency compared to the Slices. This is especially important for video decoding / processing where the Media FF can run at higher clocks for better performance while ensuring minimal power consumption. For additional power saving, power gating can be used at the Slices level or the EU group level.

The media-related changes in Skylake's Gen9 GPU are best summarized by the slide below.

Skylake brings a lot of benefits to content creators - particularly in terms of improvements to Quick Sync and additional image processing options (including real-time 4Kp60 RAW import). However, it is a mixed bag for HTPC users. While the additional video post processing options (such as LACE for adaptive contrast enhancement) can improve quality of video playback, and the increase in graphics prowess can possibly translate to better madVR capabilities, two glaring aspects prove to be dampeners. The first one is the absence of full hardware acceleration for HEVC Main10 decode. Netflix has opted to go with HEVC Main10 for its 4K streams. When Netflix finally enables 4K streaming on PCs, Skylake, unfortunately is not going to be as power efficient a platform as it could have been. The second is the absence of a native HDMI 2.0 / HDCP 2.2 video output. Even though a LSPCon solution is suggested by Intel, it undoubtedly increases the system cost. Sinks supporting this standard have become quite affordable. For less than $600, one can get a 4K Hisense TV with HDMI 2.0 / HDCP 2.2 capability. Unfortunately, Skylake is not going to deliver the most cost-effective platform to utilize the full capabilities of such a display.


Quick Sync in Skylake
Intel classifies the Quick Sync modes in Broadwell and previous generations as 'PG-Mode' (Processor Graphics). It is optimized for faster than real-time encoding and flexibility. The new mode, 'FF-Mode' (Fixed Function) is optimized for real-time H.264 encoding, with focus on lowering the latency and reducing the power consumption. Except for programmable rate control, all other aspects of the encoding algorithm are handled in the MFX itself. Since rate control is in the hands of the application software, it is possible to do a 2-pass adaptive mode even with the FF hardware.

The new mode could possibly enable better user-experience with features such as Wi-Di, screen recording etc.. Note that Skylake offers developers the flexibility to use either the PG mode or the FF mode in their applications. PG mode still retains the TUx (Target Usage level) discussed in one of the above slides. 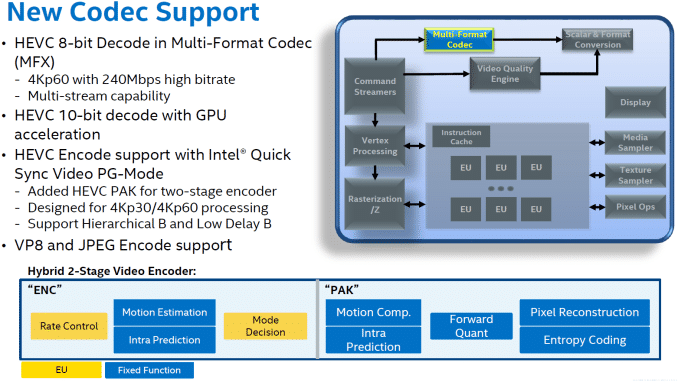 Video Post Processing & Miscellaneous Aspects
Additional improvements include a scalar and format converter (SFC) that can work with MFX and VQE (without using the EUs or the media sampler). This enables power-efficient rotation and color space conversion during media playback. 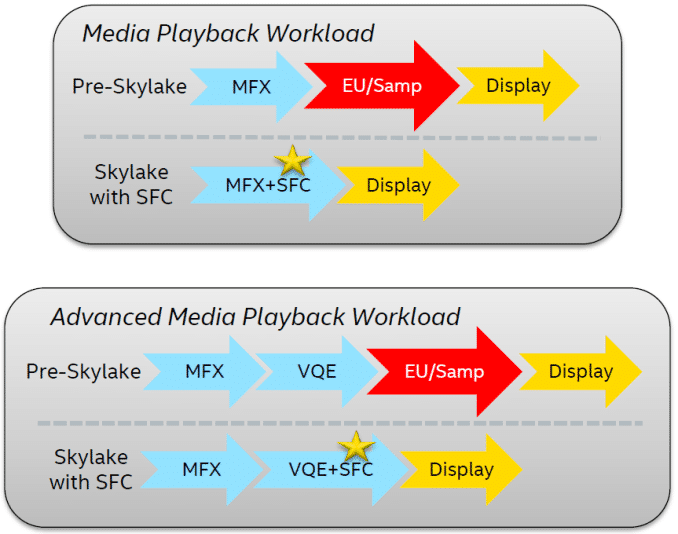 Yet another power-saving trick introduced in Skylake is the media memory bandwidth compression. The compression is lossless and managed at the driver level. 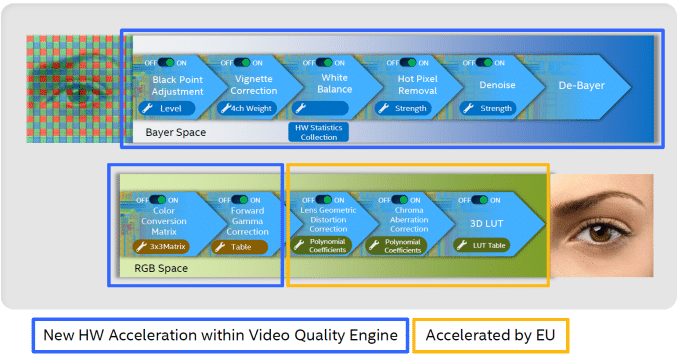 The new fixed function hardware in the performance-sensitive stages enables even low power mobile Skylake parts to support 4Kp60 RAW video processing. LACE support is not available for 4K resolution on the Y-series Skylake parts, though.

Display Capabilities
In terms of display support, Skylake can drive up to three simultaneous displays. The supported resolutions are provided in the table below. At IDF, Intel was showing off the Skylake platform driving three 4K monitors simultaneously. 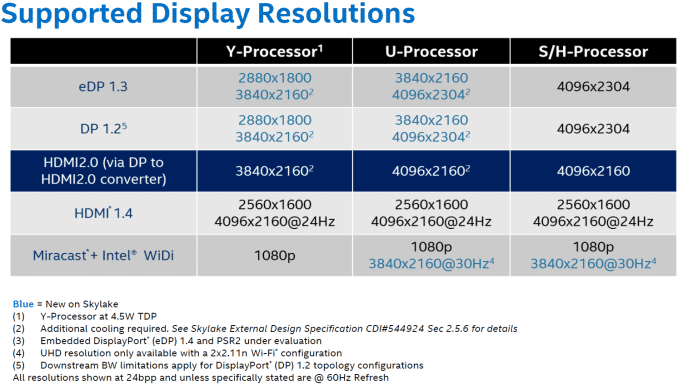 Staff member
It seems most of the time and effort by chip makers these days is in GPU/media capabilities with little attention being paid to traditional CPU processing. To be fair... when it takes nanoseconds for traditional CPU operations the difference to the consumer of 100 nanoseconds vs 10 nanoseconds being the gargantuan 90 nanoseconds is undetectable. The greater gains in GPU are understandable but also underpins the current movement.

Marketing wants instant feedback and targeting of content to the consumers of said content. Thus the shift from broadcast technologies to on demand streaming technologies. i.e in broadcast marketing doesn't immediately know what your doing. In fact in Airwave broadcast they don't even know if your watching at all. With cable we moved to some feedback, more recently with intelligent settop boxes and interactivity. however this pales in comparison to on demand, the feedback is much more detailed and targeting more granular. Not to mention the profiling opportunities abound.

Staff member
I'm excited to see the improvements Skylake brings in general and specifically in the SP4, assuming it actually comes with Skylake.

Before there were identities to steal we were anonymous, when identity theft and impersonation becomes commonplace (who's collected information will not be leaked), we will once again become as anonymous because we cannot know who anyone really is. Virtual identity, it's the way things must be in the future.

In todays world it's increasingly apparent no one is who they seem to be. GreyFox7
B

You've certainly done your research. I'm looking forward to owning a Skylake Surface in a few months.
You must log in or register to reply here.